The last will of John Wright of Plowland[1]

In the name of God, Amen. The xvj day of Auguste, 1540, I, John Wright, of Pleughlande, within the parishe of Welwicke, holl of mynde and perfite of memorie, make my will in this manner followinge. First I bequeathe my saull to God Almightie, to oure blissed laidie and to the celestiall company of heven, my bodie to be buried within the hallowed grounde. Item I bequeathe to John Wright x li., to Elisabethe Wright xli., to Charles Wright fyve marke, to John Cloughe v marc, to William Buccler xl s., to Richarde Beaniles wif xl a., to every one of Richarde Smyth children, who be fyve, xl s., to Georgie Cloughe xl s., to William Picherde xl s., to Margaret Hent fyve markes, to William Battirsbie v marc, to Richarde Curie xiij s. iiij d., to the vicare of Welwike vis. viij d., to John Arcules vj s. viij d., to William Hirdman ij s., to Thomas Carter vj s. viij d., to Rollande Murrey vj s. viij d., to Helin vj s. viij d., to Agnes xl d., to Besse ij d., to Julian ij s., to Georgie Thorp wif iiij quarters whet, to John Ferou's wif iiij quarters whet, to Sir John Foston to singe for my saull seven yeres xl s. in the yere, to waite one my wif, with mett and drinke, to the churche of Welwike vj s. viij d.,to the churche of Pattrington v s., to the churche of Hollym vi s. viij d., to the churche of Holmton vj s. viij d. Item I give to my wif all her plaite aiid the goodes that she brought with her. To Robert Wright my sone all my plate. Also I will that Sir William Constable, knyght, Sir Rauf Ellerker, knyght, maister Babthorpe, esquier, and Mr Walter Grymstone, esquier, to be supervysors of this my laste will, and evere one of them to have fyve markes. The residue of all my goodes I bequeathe to Robert Wright, my sone, whom I ordan my full executor. Thes being witnes and recordes, the vicare of Welwike, my curate, Bartilmewe Thorp, gentleman, William Carr and John Parker, yomen.

In "1519—MICHAELMAS TERM, 11 HENRY VIII.", "Walter Grymston, Nicholas Palmes, George Wright, and Laurence Diconson, chaplain" purchased from "John Wright and Alice his wife, one of the daughters and heirs of John Ryther, esq.", "Messuage[2], and 4 cottages with lands in Ottryngham, Wynested, Hollym, and Raynthorp, and the fifth part of 4 messuages with lands in Penesthorp, Southorp, Kilnesey, Beuerley, and Holmerton."[3]

In "1531—MICHEALMAS TERM, 23 HENRY VIII", "James Fox and John Wilkynson" purchased from "John Wright and Alice his wife, one of the daughters and heirs of John Ryther", "5 messuages with lands in Otteryngham, Wynested, Hollym, and Raynthorp, and also a fifth part, divided into five parts, of 5 messuages with lands in Penesthorp, Southorpp, Kylnesey, Beverley, and Holmeton, in which William Ryther has a life interest."[4]

In "1533—MICHAELMAS TERM, 25 HENRY VIII.", "John Wright" purchased from "Gerard Elwyn and Johanna his wife, George Thorpe and Elizabeth his wife", "Messuage with lands in Plughland."[5]

The following land transactions by a John Wright are recorded in the Yorkshire Fines at about the same time as those that I have been able to verify.

In "1531—MICHEALMAS TERM, 23 HENRY VIII.", "John Wright" purchased from "George Thropp and Elizabeth his wife", "Messuage with lands in Hollym."[7]

In "1533—MICHAELMAS TERM, 25 HENRY VIII.", "John Wright" purchased from "George Thorp and Elizabeth his wife", "Land and the moiety of the moiety of one bovate of land in Hollym."[8]

Extract from The Gunpowder Plot and Lord Mounteagle's Letter[9]

The Estate of Plowland came into the Wright family in the reign of Henry VIII., owing to John Wright, Esquire (a man of Kent), having married Alice Ryther, one of the co-heiresses of Sir John Ryther, of Ryther, on the banks of the "lordy Wharfe", between York and Selby.

John Wright's son, Robert, succeeded as the owner of Plowland (or Plewland). Robert Wright married for his second wife Ursula Rudston, whose family had been lords of Hayton near Pocklington, from the days of King John. Ursula Wright was akin to the Mallory (or Mallorie) family, of Studley Royal, Ripon, and so a cousin in some degree to most of the grand old Yorkshire gentry, such as the Ingleby family, of Ripley Castle and Harewell Hall, Darce, near Brimham Rocks, in Nidderdale, and the Markenfields, of Markenfields Hall, near Ripon, to mention none others beside.

Robert Wright (the second Wright who owned Plowland) had been married before his marriage to Ursula Rudston. His first wife's name was Anne Grimstone. She was the daughter of Thomas Grimstone, Esquire, of Grimstone Garth. Robert Wright and Anne Grimstone had one son who "heired" Plowland. His name was William Wright. He married Ann Thornton, of East Newton, in Rydale, a lady who was related to many old Rydale and Vale of Mowbray families in the North Riding of Yorkshire. The names of William Wright and Ann, his wife (born Thornton), are still recorded on a brass in the north isle of Welwick Church.

William Wright was a half-brother to Ursula Ward, the wife of Marmaduke Ward, of Mulwith, Newby, and Givendale, near Ripon, the parents of the great Mary Ward, the friend of popes, emperors, kings, nobles, statesmen, warriors and indeed of the most distinguished personages of Europe during the reigns of James I. and Charles I. William Wright (or Wryght, as the name is spelt on the brass in Welwick Church) was also half-brother to the two Gunpowder conspirators, John and Christopher Wright, who were slain at Holbeach House, Staffordshire, a few days after the capture of Guy Fawkes by Sir Thomas Knevet, early in the morning of November 5th, 1605.

Wright Brothers of Plowland and The Gunpowder Plot

Along with eleven others John Wright and Christopher Wright were part of the plot to assassinate King James I of England and VI of Scotland by blowing up the House of Lords during the State Opening of England's Parliament on 5 November 1605. This act was to be the prelude to a popular revolt in the Midlands during which James's nine-year-old daughter, Princess Elizabeth, was to be installed as the Catholic head of state.

Mr John Wright was a gentleman of Yorkshire, not born to any great fortune, but lived always in place and company of the better sort. In his youth and for the most of his time very wild and disposed to fighting and trial of his manhood, as I touched before. He became Catholic about the time of my Lord of Essex his attempt, in which he was ; and after that time kept much with Mr. Catesby and some other gentlemen of his friends and acquaintance. He grew to be staid and of good sober carriage after he was Catholic, and kept house in Lincolnshire, where he had Priests come often, both for his spiritual comfort and their own in corporal helps. He was about forty years old, a strong and a stout man, and of a very good wit, though slow of speech ; much loved by Mr. Catesby for his valour and secrecy in carriage of any business, which, I suppose, was the cause why he was one of the first acquainted with this unfortunate enterprise.

Mr. Christopher Wright, younger brother to John Wright ......., by whom also this other may be known without new description. For though he were not like him in face, as being fatter and a lighter coloured hair and taller of person, yet was he very like to the other in conditions and qualities, and both esteemed and tried to be as stout a man as England had and withal a zealous Catholic and trusty and secret in any business as could be wished : in respect whereof they esteemed him very fit to be of their company and so caused him to take the oath of secrecy and he received the Blessed Sacrament thereupon (as they had also- done) and so admitted him. Not long after they admitted also another, which was Mr. Robert Winter, the eldest brother to Thomas Winter before spoken of.

The following picture depicts eight of the thirteen Gunpowder Plot conspirators, including the Wright brothers. 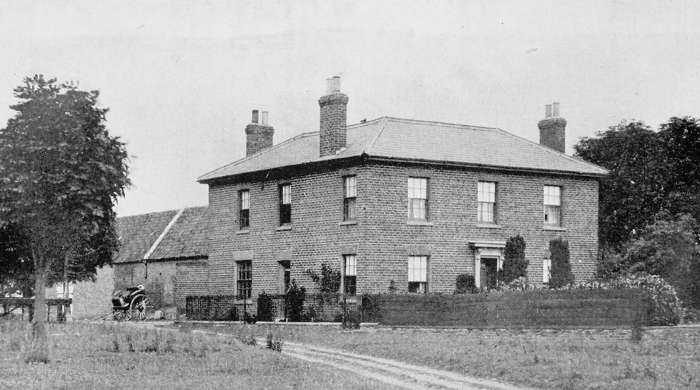 Monument to William and Ann Wright[13]

William and Anne Wright are buried at St Mary's Church, Welwick, Yorkshire. Their names are recorded on a brass plaque in the north isle.

"Here lie interred ye bodies of William Wright, of Plowland, Esq. and Ann, his wife, who, after they had lived lovingly together ye space of fifty yeares in the fear of God and love of men, finished a faire pilgrimage to a joyfull Paradice, Ann, ye 28 of Dec. in the year of grace 1618, and ye said Willm. ye 23 August , A. Dni. 1621, whose sowles God hath in His blessed keeping. Memoria justi vivet in Eternum"

[2] Messuage - a dwelling house with out-buildings and land assigned to its use.

[9] The Gutenburg Project: The Gunpowder Plot and Lord Mounteagle's Letter, Being a Proof, with Moral Certitude, of the Authorship of the Document: Together with Some Account of the Whole Thirteen Gunpowder Conspirators, Including Guy Fawkes.
Author: Henry Hawkes Spink Jr. Published 1902. pp. 285-286

[10] The Condition of Catholics under James 1. Father Gerard's Narrative of the Gunpowder Plot: Edited with his life, by John Morris, Priest of the Society of Jesus.
Published London: Longmans, Green, & Co. 1871. p. 59

[11] The Condition of Catholics under James 1. Father Gerard's Narrative of the Gunpowder Plot: Edited with his life, by John Morris, Priest of the Society of Jesus.
Published London: Longmans, Green, & Co. 1871. p. 70

[12] The Gutenburg Project: The Gunpowder Plot and Lord Mounteagle's Letter, Being a Proof, with Moral Certitude, of the Authorship of the Document: Together with Some Account of the Whole Thirteen Gunpowder Conspirators, Including Guy Fawkes.
Author: Henry Hawkes Spink Jr. Published 1902.
Image of Plowland House (accessed 11 September 2015).

[13] These pictures have kindly been provided by BritainExpress.com (accessed 03 April 2016)

[14] The life of Mary Ward by Catharine Elizabeth Chambers of the Institute of the Blessed Virgin. Edited by Henry James Coleridge of the Society of Jesus. Volume 1. Published by Burns and Oates, Granville Mansions W, London. 1882 p.15

The TLS/SSL certificates used on this website are issued by